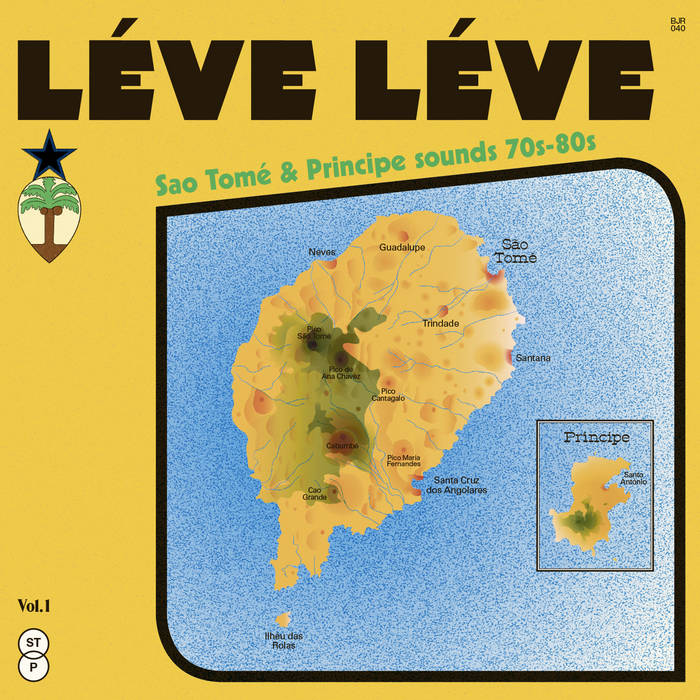 bonnieprince Some absolutely amazing music from somewhere i'd never heard music from. Really merges a lot of strands of Brazilian and Afro music from the time, and adds in a local flavour. Don't sleep on this! Favorite track: Tiny das Neves - Cladênço padê cluço.

The two Portuguese-speaking African islands of Sao Tomé & Principe, located in the Gulf of Guinea, created an unique music called Puxa : a refined mixture of various musical components from both sides of the Atlantic Ocean. A blend of Semba, Merengue, Kompas, Soukouss, Coladeira patterns, often pushing forward with a voodoo-like energy, solid bass lines, delicate melodies and backing harmonies of the rich Sao Tomean melodic traditions. Very first compilation focusing on the golden age of these island’s sounds, the 16 tracks selected will surely set fire on all dance floors !

Léve-Léve is the first ever compilation devoted to music from São Tome and Principe, two small islands situated off the coast of Gabon in central Africa. The album unravels a story of liberation where the music of Africa, Europe and the Americas unify with a carefree spirit personified by a phrase the islanders use all the time: “léve, léve” (“take it easy”). With echoes of Angolan semba and merengue, of Brazilian afoxê, of coladeira from Cape Verde and dance music from the Caribbean, it is a sound fiercely proud of its island heritage, sung in local dialects and using distinctive local rhythms.

On this record you can hear the cultural and social history of São Tome and Principe, and how live music represented its beating heart. Once known as the “Chocolate Islands” (remarkably, these two tiny islands were the largest cocoa producers in the world, though now this title acts as a reminder of its colonial past), through the years leading up to independence from Portugal, music would be a fundamental voice of liberation and conviviality. Os Úntués were one of the first groups to make an impression, releasing a couple of 7 inches in Angola – the litmus test of success for any of the islands’ groups. They united unique rhythms and dances like socopé, puita and dança-congo – borne from the islands’ largely slave-descendant population – with the sound of pop music beamed in on the radio from Europe, even adding in a little bit of soukous and Brazilian instrumentation. Their main rivals were Conjunto Mindelo, who fused São Toméan rhythms with rebita, an Angolan style, to create high energy puxa, a truly original island rhythm.

From the mid-1970s, coinciding with independence from Portugal in 1975, the islands’ groups featured an even stronger African influence and nowhere was that more apparent than with Africa Negra. They would listen to the latest records from Gabon, Zaire and Cameroon, taking inspiration and trying out phrasing from the greats of Central African guitar playing, developing a devoted fan base off the islands, as well as on. A score of other bands would follow a similar musical path, with a few getting their dues overseas in Angola, Cape Verde, Portugal and across Africa.

Os Leonenses (led by the iconic Pedro Lima), Conjunto Sangazuza, Sum Alvarinho and Conjunto Ecuador were just some of the other bands that formed a lively home-grown music scene that lit up the islands’ bars and open-air shows from the 1950s through to the mid-90s. Regardless of class or age, they were responsible for keeping the population entertained come the weekend, with Sunday matinee shows the highlight of the week, the music not stopping from midday until midnight.

As a Portuguese island colony that was for many years populated with slaves brought from Africa, São Tome and Principe has much in common with other Lusophone countries and boasts a richly complex and idiosyncratic musical DNA. Whilst the musical tapestries of Angola and Cape Verde are well known, São Tome and Principe’s secrets were assigned to the islanders themselves. Until now.

Bongo Joe explores contemporary undergrounds to dig out extraordinary sounds and plows the furrows of time to unearth rare nuggets from here, there and everywhere.

Bandcamp Daily  your guide to the world of Bandcamp